Have Pests or Termites?

WE USE PET FRIENDLY SOLUTIONS

Dealing with Subterranean Termites in South Florida requires professional services. Whenever you say “Oh no, termites!” also say "I need professional services!" Within a termite nest there are members of different castes, each with a different role to perform, and all interdependent upon each other for survival of the colony. These include the queen, king, the winged reproductive (young kings and queens), soldier and worker termites.

The queen termite is an egg laying machine; her body is enormous compared to her off-spring; she can live more than 25 years and produce more that 2,000 eggs a day. 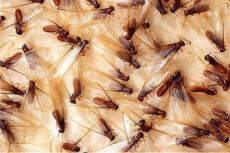 Subterranean termites in South Florida are small in size, about half the size of match-head or 1/8″ long and are soft bodied insects. They have no wings, are sterile, blind and work 24 hours a day for their entire 2 year life span.
The soldiers are the defenders of the colony, particularly against marauding ants – with whom they have engaged in a relentless war, lasting 250 million years.

Subterranean termites travel in these mud shelter tubes, as protection from predators, sun-burn, dehydration, and to maintain a high humidity environment, which is essential for their survival.

Western subterranean termites in South Florida are highly secretive, preferring to enter a building through areas inaccessible to inspection: in-fill patios, fire heaths, expansion joints and cracks in concrete slab (on-ground) flooring.
Western subterranean termites in South Florida can pass through a 1/8″ crack or an expansion joint (eating through the rubber compound) between adjoining concrete on ground flooring. They can also travel under parquetry, and floor tiles, to get to the wall framing timbers.

Only the worker termite caste can digest timber by the use of symbiotic protozoa in their gut. Worker termites feed their partly digested semi-liquid food, regurgitated from their mouth, or passing from their anus, to the other termites, a process known as trophallaxis.

Western subterranean termites in South Florida have a well ordered social system, with amazing engineering capabilities, and an acute survival instinct; they obtain moisture from the soil and moist decaying timber, and communicate using pheromone signals.

Certain hi-tech termite baits are now on the market; they have a delayed lethal effect on termites, which readily pass on the bait to other termites in the central colony nest, during the mutual grooming and feeding.

Western subterranean termites in South Florida need to maintain a high level of humidity, and temperature (75 to 95F) in their central colony nest.

Western subterranean termites in South Florida eat through the center of susceptible timbers, leaving nothing but a thin veneer of timber and/or paint. They will pack mud in cracks and joints in timber, to prevent loss of humidity and resultant dehydration.

As noted above, Subterranean Termites in South Florida, constantly groom and feed each other. A valuable technique for the termite controller, is to install and monitor a termite baiting system, next to any live activity found in and around the premises, where termite foraging is most likely to occur. Subsequent inspections, (preferably monthly), may reveal dead or sick worker termites, they change color to a mottle look, and spread the termite bait to other termites leading to elimination of the colony.

The termite baits are designed to be non-repellant to the termites, and have a unique delayed effect; time enough to be passed onto the other termites in the colony, including the queen, with a sufficient dosage leading to the elimination of the entire colony. This process is explained in detail in the Termite Control section of this website